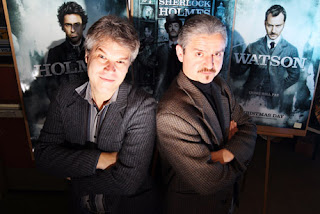 J. R. Campbell’s fiction has appeared in a wide variety of publications including Spinetingler Magazine, Wax Romantic and Challenging Destiny. From time to time his writing can also be heard on radio’s Imagination Theater and The Further Adventures of Sherlock Holmes.

Charles Prepolec has contributed articles and reviews to All Hallows, Sherlock Magazine, Scarlet Street, and Canadian Holmes. An active Sherlockian for more than 20 years with The Singular Society of the Baker Street Dozen, Charles lives in Calgary with his wife Kristen and their cat Karma.


Posted by EDGE Science Fiction and Fantasy Publishing at 8:26 AM