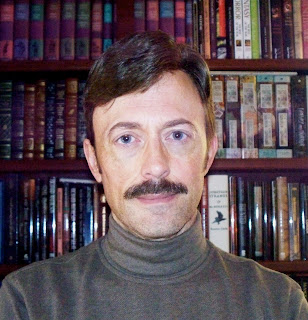 GG: Welcome Tom.  Can you tell our readers where are you from?

Tom English:  Thanks. I'm from Hampton, Virginia, USA; I currently reside in (and am now writing from) my home in the woods of New Kent, Virginia.

GG: What is the name of your story in Gaslight Arcanum?

GG: Without providing a spoiler, please give us a summary of your story?

Tom English:  Holmes and Watson investigate the mystery surrounding an occult artifact which may be responsible for a string of ghastly crimes: an enigmatic tome which has been in the safekeeping of the Holy Church for hundreds of years -- until its sudden, inexplicable disappearance -- and which the Church appears overly anxious to recover.

Actually, I love the way editor Charles Prepolec described the story in his Introduction “I Hear of Sherlock Everywhere…” and I can't state it any better:  “A ghastly grimoire, written in the blood of a madman, is stolen from the monks who have guarded its secrets for centuries. To stop a string of terrible and inexplicable murders they turn to Sherlock Holmes, but can even the Great Detective withstand the pull of these cursed pages?” (Absolutely marvelous copy that makes me want to re-read it!)

GG: What do you like the most about this collection?

Tom English:  I love the character of Holmes, and I love to read and write atmospheric tales of the supernatural; so it's the unapologetic pairing of these two great passions -- by a couple of editors who themselves share and understand these loves.

GG: In a recent interview with Bitten by Books, the authors from Gaslight Arcanum provided questions for the other authors to answer. Can you please share your favorite questions and your answers with us?

Paul Kane asked: How easy or hard did you find it working on a Holmes story?

Tom English: Writing the story was extremely intimidating. Not the mechanics of it: The characters of Holmes and Watson are like two old friends, and I felt comfortable writing dialogue for them. As for the “feel” of the story, I typically write atmospheric tales about just the sort of strange little things that would have roused the curiosity of Holmes. But knowing that I was handling characters that are incredibly dear to readers -- that Holmes and Watson are international heroes -- that was intimidating. So even while trying to do something different story-wise, I was constantly on my guard NOT to violate the integrity of the original characters.

Kevin Cockle asked: How much of a Sherlock-geek are you? Did you think going in that it was essential to have some grasp of the original source material? Do you HAVE expertise when it comes to the originals?

Tom English: I’m a huge fan of Sherlock Holmes. I had read Doyle’s original tales and I continue to enjoy most of the filmed versions of the characters. I think it would be impossible to do justice to the characters without some knowledge of the original stories. So before writing a single word I went back and re-read several of my personal favorites. I also cracked open a couple volumes of Sherlockian scholarship.

Christopher Fowler asked: “Why don’t the long Conan Doyle stories work as well as the short ones?”

Tom English: The mysteries in many of Doyles’ short Holmes tales are fairly uncomplicated affairs -- such as who is “The Solitary Cyclist” and why is he pursuing Violet Smith -- and yet their solutions are always fascinating and highly satisfying. We don’t have too many suspects to deal with and the plots don’t get convoluted. Instead we’re treated to a singular problem and a singular detective to dazzle us with its solution, and Doyle’s solutions are generally not what we’re expecting. These little problems work well as short stories and not so well as novels. Now, that said, let me also state that I love ACD’s longer Sherlock Holmes tale THE HOUND OF THE BASKERVILLES. It’s beautifully done.

GG: Since this is an anthology of Uncanny Tales of Sherlock Holmes, we thought we would ask, What is the most “uncanny” thing that has happened to you personally?
Tom English: Okay, I’ll tell you a ghost story. Something very personal from my journal. It’s not at all scary, but it’s strange nevertheless. My wife and I live in the woods. Our home is surrounded by thousands of acres of timberland. There’s an old fire road that winds through the woods behind our home, and I often jog down this narrow lonely dirt road beneath a canopy of overhanging tree branches. For a couple years my running companion was my dog Windy, a chow-mix with long blond fur and an adventurous spirit. I wrote about this dog in my ghost story “Lightning Rod” (in ALL HALLOWS #43), although the events of that tale have nothing to do with what I’m relating now.

Windy would run ahead of me (yes, like the wind) and disappear into the woods. She would leave the trail and dart through the trees undoubtedly on the scent of a deer or a raccoon. I would continue running the trail, rarely worrying about her, knowing how savvy she was, and that at any moment she would reappear from the trees and rejoin me on the dirt road. Sometimes Windy would be gone for what felt like an eternity, though; five or ten minutes, within which time I had covered a mile or more. I would then start to wonder a little, but invariably she would rejoin me, running out onto the road somewhere behind me and then sprinting to catch up to me.

I never had to look back on those occasions. I knew whenever Windy had reappeared behind me because she wore a leather collar with three metal tags (identification, vaccination, and license), which made a distinct and comforting jingling noise. I cannot count the times I’d hear the jingle of her tags in the middle of nowhere and know that she’d finally decided to return to me on the trail. Well, those happy times didn’t last; Windy had one annoying habit: she loved to chase cars. I didn’t think this was a big problem, what with living in the middle of the woods. But one day Windy decided to peel out after the car of one of our very few neighbors. She didn’t realize, though, that the car was being followed by an SUV. When she shot out of the trees the second vehicle struck her. Windy died instantly, probably painlessly, I think, but she was a big part of my life and I mourned her death for many months. And I couldn’t go back out on that wooded trail where we jogged together so many times without crying.

So for a while I stopped running altogether. When I did finally start running again, it was on a cold day and the trees were bare. The sky overhead was overcast and the woods felt deathly still. But as I jogged down that dirt trail l heard something that made me stop and quickly turn back in expectation. It had sounded like the jingle of Windy’s metal tags. Of course, there was nothing there. But the sound had not been in my imagination. It had been an audible clinking so real that I had fully expected to see Windy running up the trail to greet me.

To this day, I still miss my jogging companion. And to this day, when running through the woods, I sometimes still hear the audible clink of Windy’s dog tags following behind me. Only now, I don’t look back. I know in my heart that she’s rejoining me on that lonely dirt road.

GG:  What is the best piece of writing advice that you have either received, or given?

Tom English is an environmental chemist for a US defense contractor. As therapy he runs Dead Letter Press and writes curious tales of the supernatural. His recent fiction can be found in the anthology Dead Souls (edited by Mark Deniz for Morrigan Books) and issues of All Hallows (The Journal of the Ghost Story Society). He also edited Bound for Evil, a 2008 Shirley Jackson Award finalist for Best Anthology, featuring stories about strange, often deadly books. Tom resides with his wife, Wilma, and their Sheltie, Misty, deep in the woods of New Kent, Virginia.
Posted by EDGE Science Fiction and Fantasy Publishing at 5:51 PM